In 20 years of watching live music, this was without doubt the best gig I’ve ever seen – let alone been lucky enough to photograph. A truly phenomenal night. My colleague Peter Ormerod was reviewing and wrote the following words, published across Johnson Press sites in the Midlands region.

Those words, written in small but elaborate script on the side of Nick Cave’s piano, go some way to describing the performance of Nick Cave and the Bad Seeds in Nottingham.

Here are some more: Lacerating. Scalding. Elemental. Transcendent. Soaring. Defining. As pure theatre, it was unsurpassable; as a demonstration of musicianship, immaculate; as an exercise in demonstrating the power of music and words to change lives, extraordinary.

And that was just the opening song. He’s been around a while now, NIck Cave. He’s in his fifth decade of all this.

The trajectory of his career has been unlike any of his peers, insofar as there are any: he is a relative newcomer to arenas of this size, and his most recent album is among his most commercially successful. And this slow explosion into mainstream consciousness has come as a result not of compromise or commercial ambition, but of an indestructible, ineluctable artistic integrity.

There were countless remarkable things about tonight’s show, but perhaps the most telling was how music with such potential for bleakness and darkness can be transfigured into something euphoric.

The set drew heavily on 2016’s Skeleton Tree, hardly anyone’s idea of feelgood album, and yet one clearly in possession of a rare power to rip through souls and somehow put them back together again.

It’s art that goes so deep it passes through to the other side, where it meets daylight. 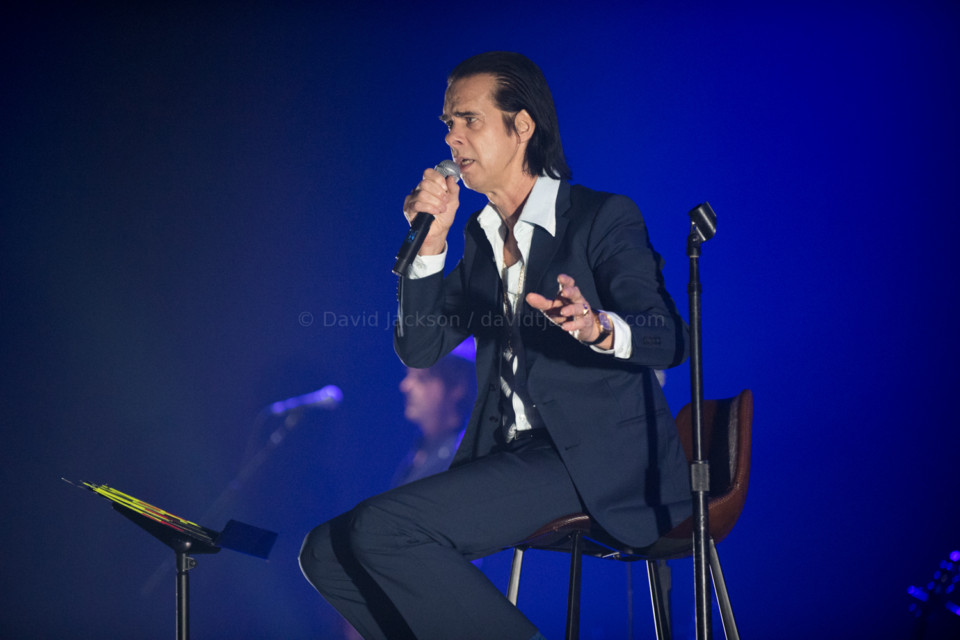 A competent performance of the songs alone would be enough to make the show a triumph. But this was far more. This was less concert, more communion.

Cave spent much of the night either leaning into the crowd, or actually in the crowd.

When on stage, he moved with reptilian grace, often bearing on his face an imploring expression, rock’s supposed Prince of Darkness a compellingly kindly figure.

Yes, he could probably rip out your spine if he was so minded, but he wasn’t. The show started with three Skeleton Tree songs, Anthrocene, Jesus Alone and Magneto.

None is a rip-roaring, crowd-pleasing rocker, but such was the sense of deep-brewed intensity that one wondered whether the evening had anywhere left to go. Of course it had: the raucous release of Higgs Boson Blues, followed by the shoutalong From Her to Eternity.

Then the prowl and growl of Tupelo. Then a full-on rock assault with Jubilee Street. Then a huge anthemic The Ship Song and intimate Into My Arms. Roars. Screams. Sighs. Tears.

Tonight’s Mercy Seat could have powered a city. Red Right Hand smouldered with seduction and danger, Cave tantalising individuals in the crowd.

And there was humour, too: Cave’s occasional comments to fans and their partners, his reading of a birthday card presented to him on stage. It’s rare to see such a towering figure have such a profoundly personal relationship with his audience. But nothing sounded better than the Skeleton Tree songs. Distant Sky, its heartbreaking nursery-rhyme chorus sung by a projected Else Torp, was tender and delicate as a moth.

I Need You – those three words have been a staple of popular music for 60 years, but have surely never been sung like this, with this desperation, this sense of one’s very existence being wholly dependent on another.

The main set closed with the broad, scorched, yearning vistas of the album’s title track.

And just when you thought no further heights could be reached tonight or any other night, there was the encore. Cave clambered up into the arena’s seats amid the crowd for almost unbearably resonant renderings of The Weeping Song and Stagger Lee; even by this point in proceedings, the voice was vast and dark and endless.

By now, the stage was filled with dozens of dancing and swaying fans. We ended with a drifting, wafting, ecstatic Push the Sky Away.

It sounds an odd thing to say of someone with Cave’s career, but there is a sense of a man and his time having finally found each other. He and his work feel entirely right for this moment.

He has the experience to enrich his older, spikier material with new depth and colour, while his magnificent newer songs could have been written only a person who has lived his life.

This entry was posted in News and tagged Motorpoint Arena, Nick Cave, Nottingham.